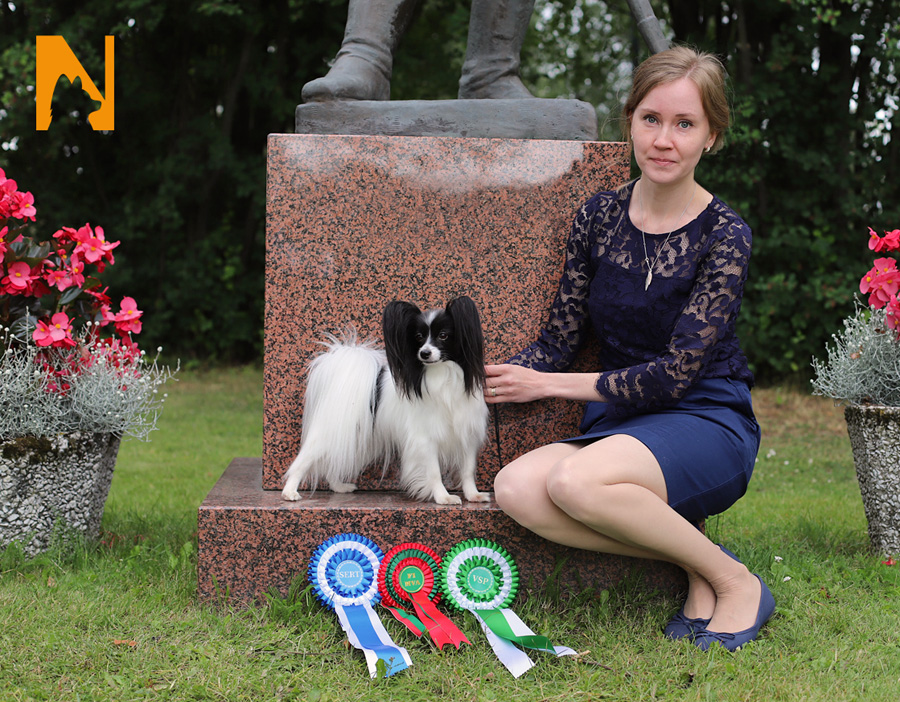 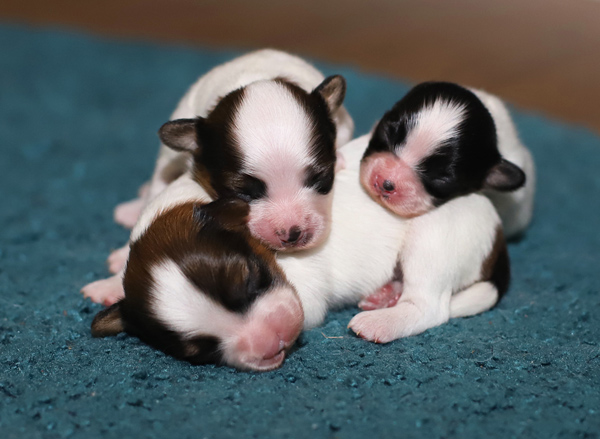 Our 10th litter was born in my birthday (suprisingly) 14th June. Mother is our sweet and precious Pai (FI CH, FI AJCH, HeJW-14 Neelis Bonnie Pie), which is a super mom and births easily. Father of the puppies is Macho (FI CH Neelis Imperial March). Two girls and one boy (in the middle). Neelis High Five, Neelis High Hopes, Neelis High On Life. FI CH, HEJW-14, FI AJCH Neelis Bonnie Pie "Pai" and Jaana Airola (P-HAU) made history being the first ever to win Finnish Agility Championship 2019 (indoors) in xs-xlass. Pai is also the first papillon to win a finnish championship. So super little rally papillon! Agility Indoor Championships were held in Vantaa 23.-24.3.2019 by Suomen Agilityliitto, judge Bonnik Bertehlsen, Denmark. Saturday Pai won the jumping course and made it to the finals. You can see our run here.

Sunday Pai was the last to start to the xs-class final course, because she was the best xs-dog in saturday. When we waited our turn, I heard that many made clear runs, so we must be a little bit faster than the others! Pai was awwsome and run like never before. So we made a clear run and afterwards heard that we were faster than anyone else! Our final course was super tough I wasn't as fast as Pai. ;) Video from our final run. 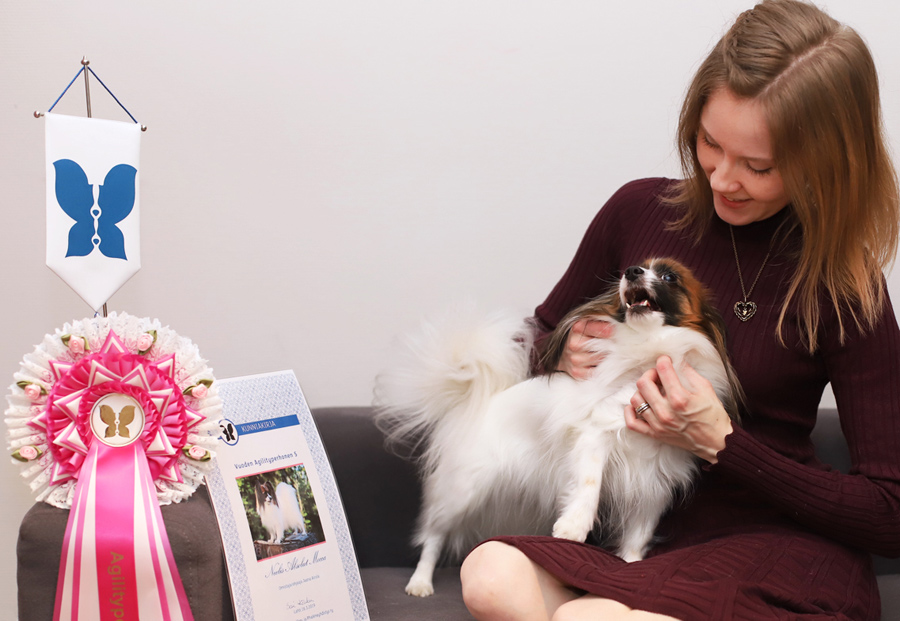 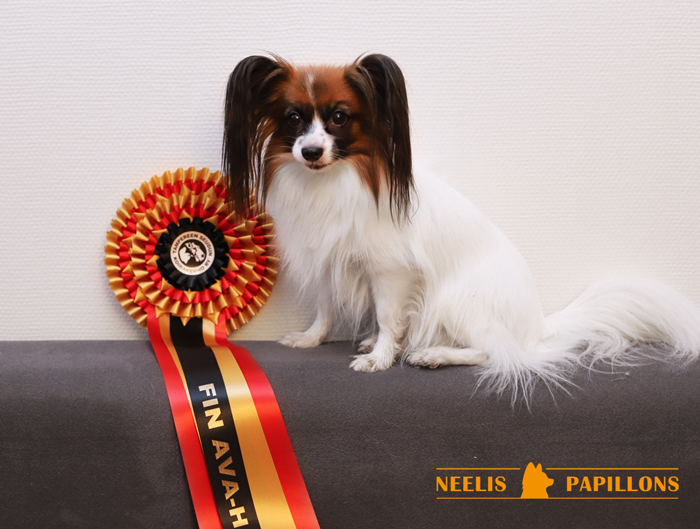 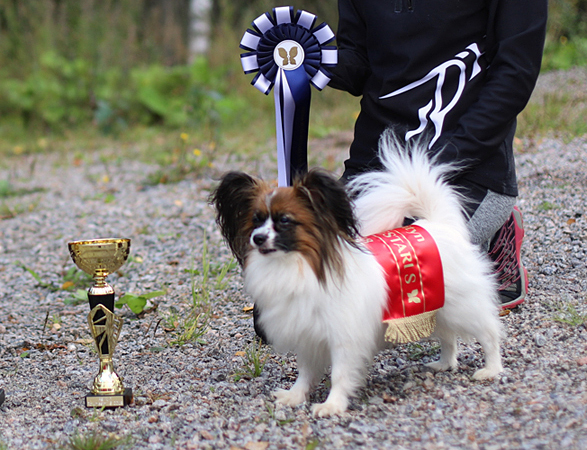 FI CH & FI ACH Neelis Absolut Mocca did great in papillon and phalène agility breed championship in Jyväskylä 16.9. and won the title in small class. She has won the title also in year 2016. Here you can see our tracks on that day. 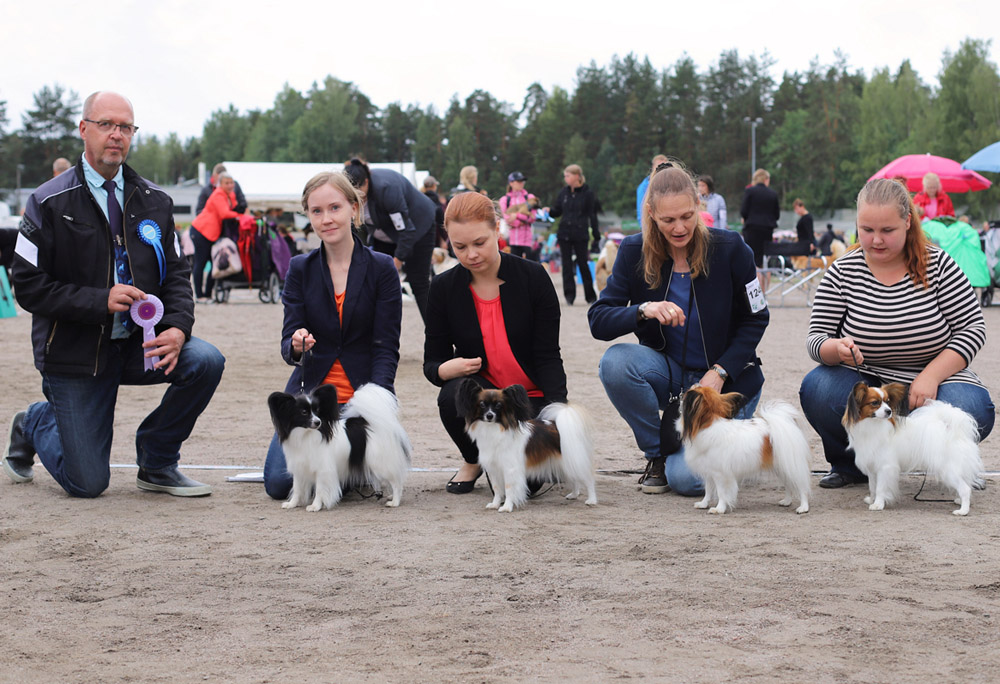 We had a great day in Heinola all breed dog show! We were judged by Juha Putkonen and he gave us Honorary Prize for our breed group. Rivamare Fella made his rebut to rings being best male 2nd with re-certificate! Thanks to all in our "team"! And thanks for our group photo to Riina Laihanen. 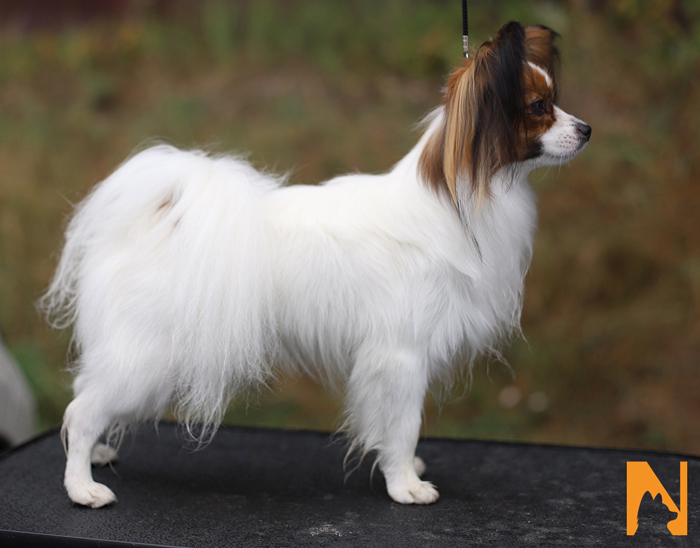 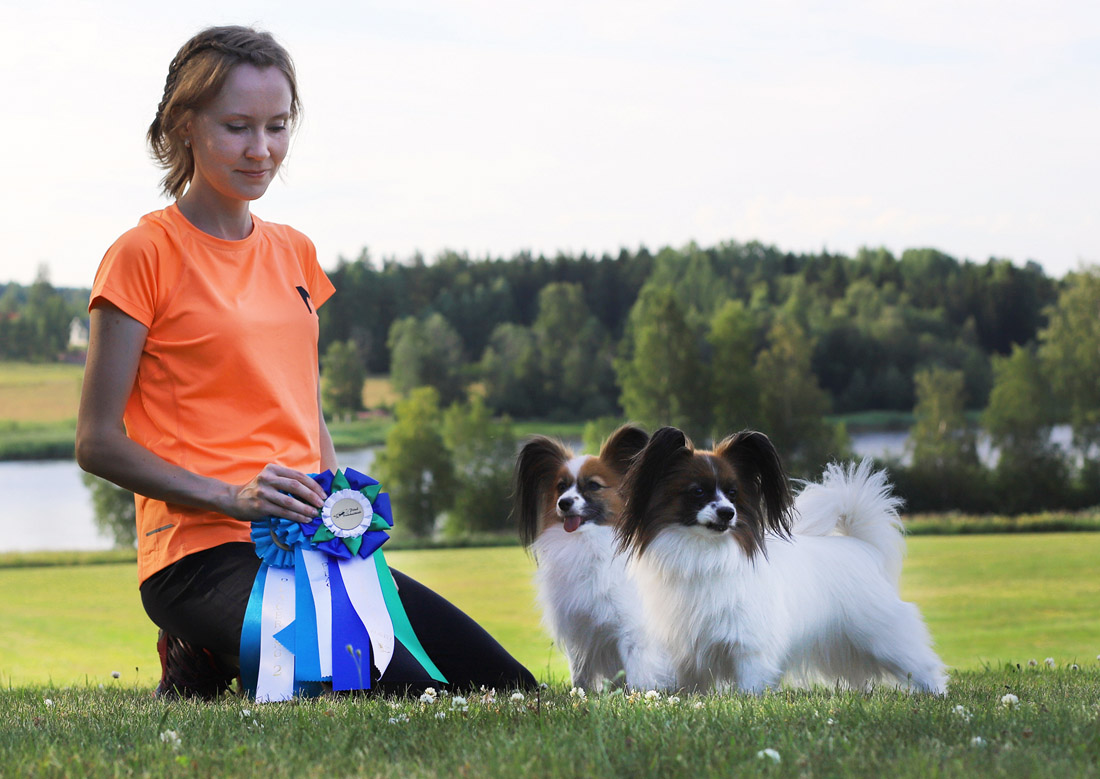 We went to the Piteå agility competition 14.7. in Sweden and Pai won the agility race so she got a swedish agility certificate! Mocca did great in the jumping course and did a clear run, but she got the second place. Pai got a pair faults in the jumping course, but her placement was still 3rd. We also took part to he Piteå's international dog show with Pai and Kismet, but didn't get a much of an succeed. It was a nice and succesfull trip nevertheless! Thank you for the photo (above) and your company Henna Pätäri & Urpo. 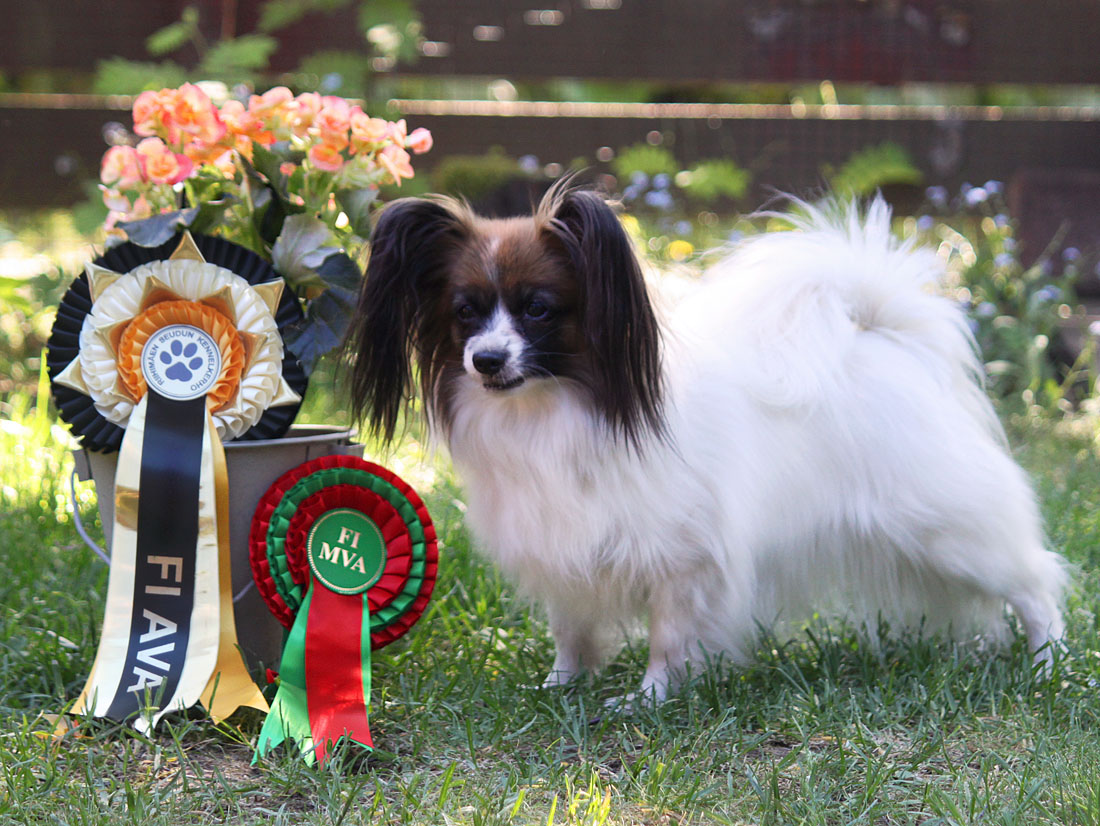 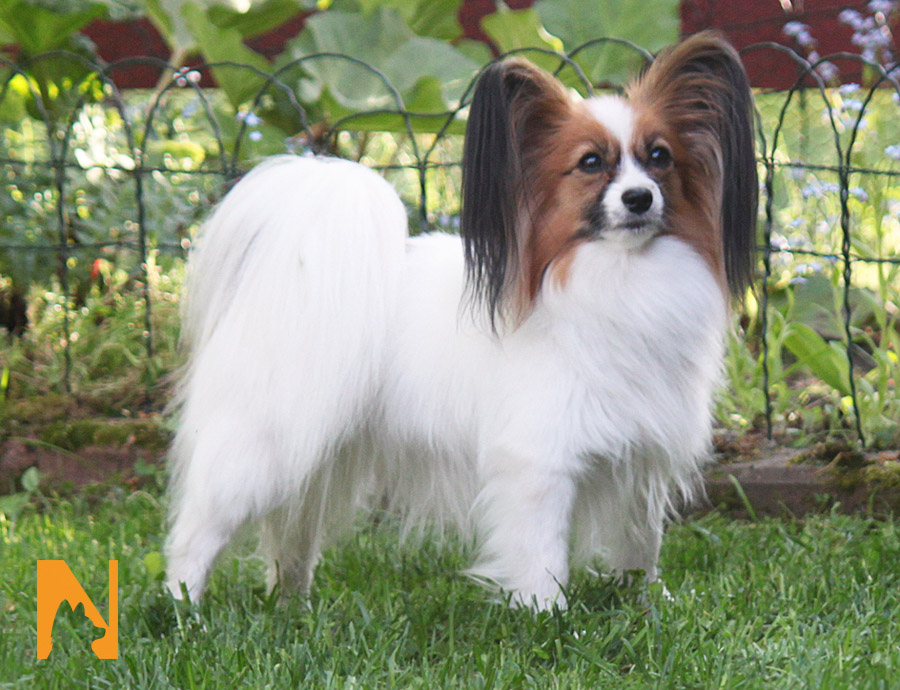 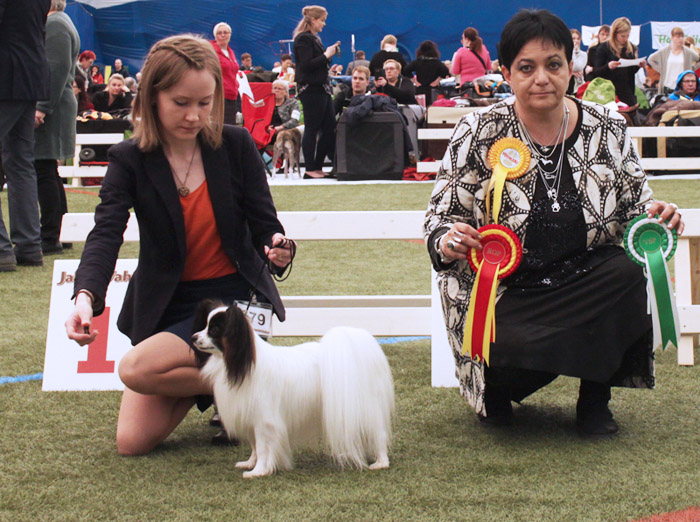 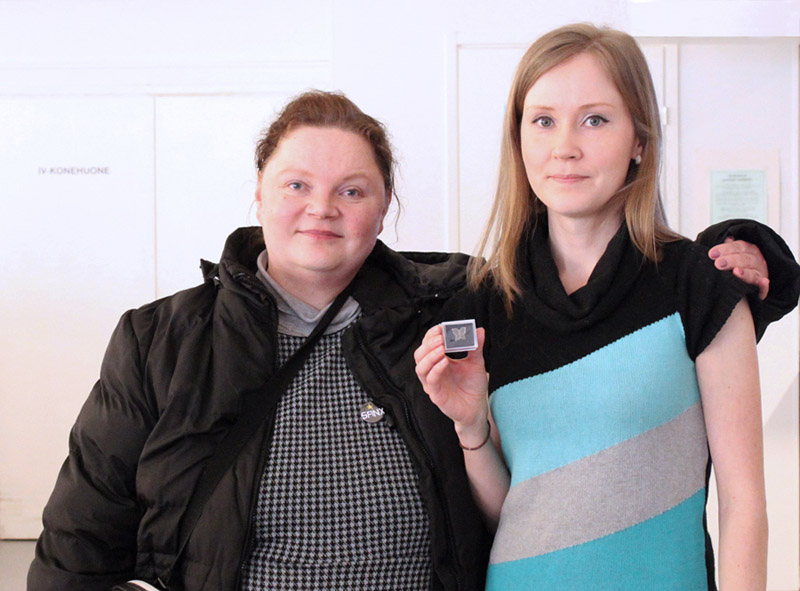 Finlands Papillon & Phalène Club granted a silver badge of merit to Jaana Airola for the active and long time work in the club. 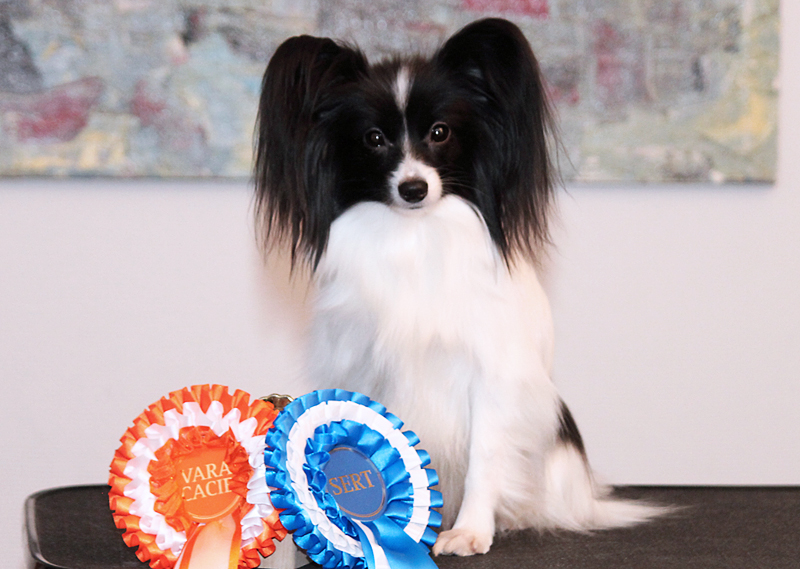 Earlier Neelis Nikko Ranger "Nippe" had his eyes examined and eyes were healthy. His auscultation examination was clear as well. KoiraNet -Breeding database 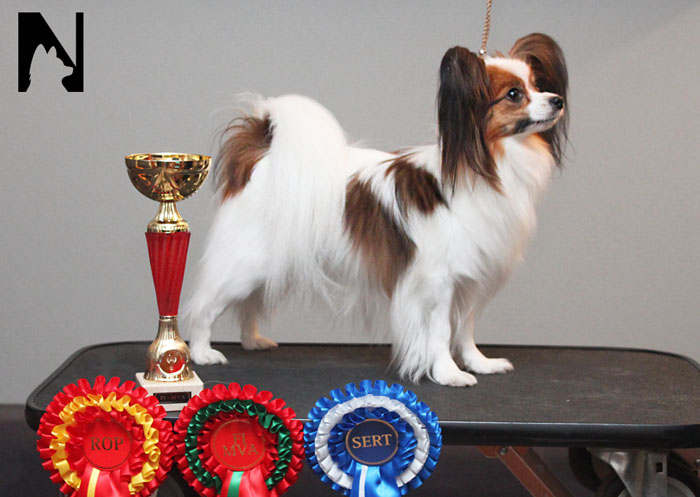 At two years of age Neelis Her Royal Highness "Helmi" was chosen Best Of Breed in Tuulos dog show by judge Valentinas Stiklius, Liethuania. She got her 3rd certificate and she's now a new Finnish Champion! 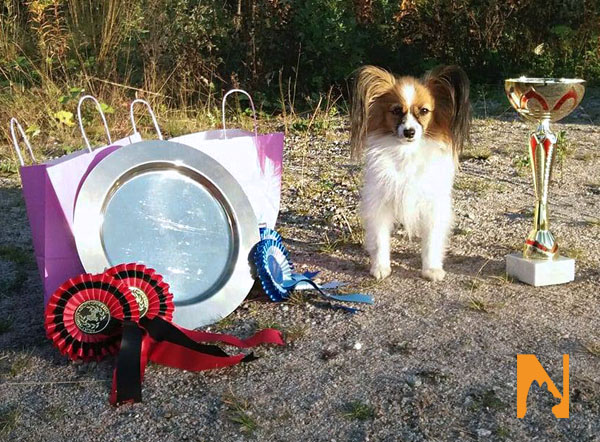 In agility Breed Championship Lieto "Pai" started her first competition in mini3-class with a great result: -6.89, 3rd/43 and agility certificate! In jump course I made a mistake and didn't show the last jump clear enough so Pai run past it (=1 refusal), so we lost the lead and got the 3rd place in Breed Championship (Rotumestaruus 2017). Overall there was 11 papillons in the competition. Mocca got disqualified in first course so she was out of the race. Judges were Johanna Nyberg and Petteri Kerminen. 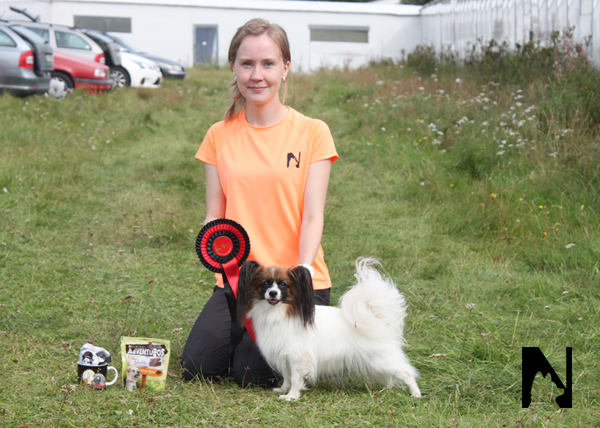 Agility competition in Kouvola 2.9.2017, judge Marja Lahikainen. Mini3 Mocca did her best and she won the jump course! Our placement was 1./18 and jumping CAC! (For those who don't know, dog gets agility champion title with 3 agi CAC and the last one you can get no earlier than year from the first.)

On the same weekend Mocca's daughter Pai(HeJW-14 Neelis Bonnie Pie) mini2, won her class and got the CAC to the mini3-class. Pai's performance you can watch in our Youtube-page. 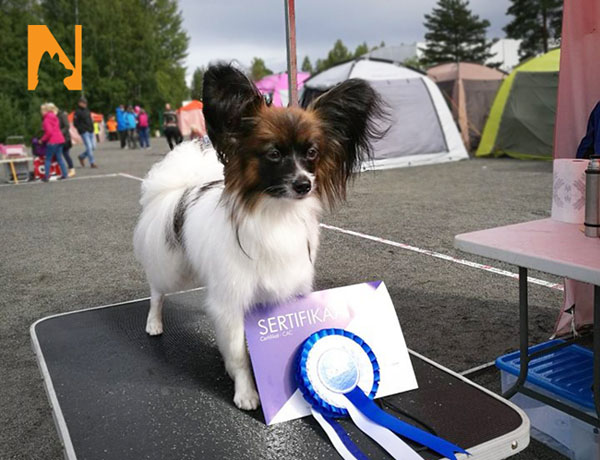 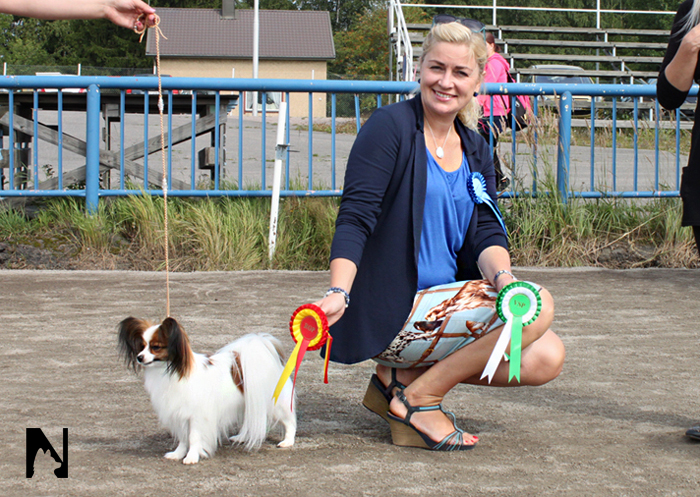 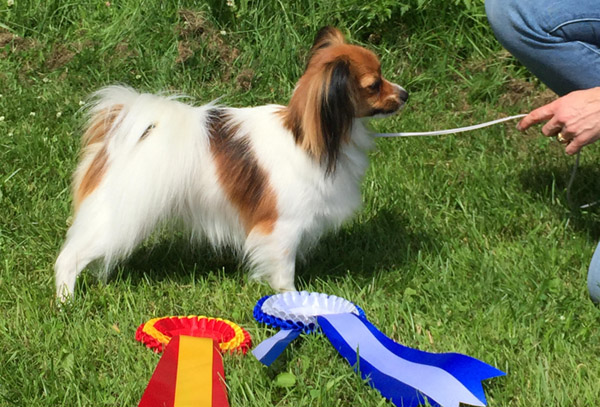 Ralliperhoset (Rally butterflies) won second place in breed team competition in Agirotu 2017, Mikkeli. Team consisted of four papillons and one of them was our Mocca, Fi Ch Neelis Absolut Mocca. All in all there were 31 teams in mini class, so we are so proud of our result!

In the same weekend Mocca participated on Finnish Agility Open -competition and she made it to the finals with clear round. In final course we made a little mistake so our final placement was 17./95. 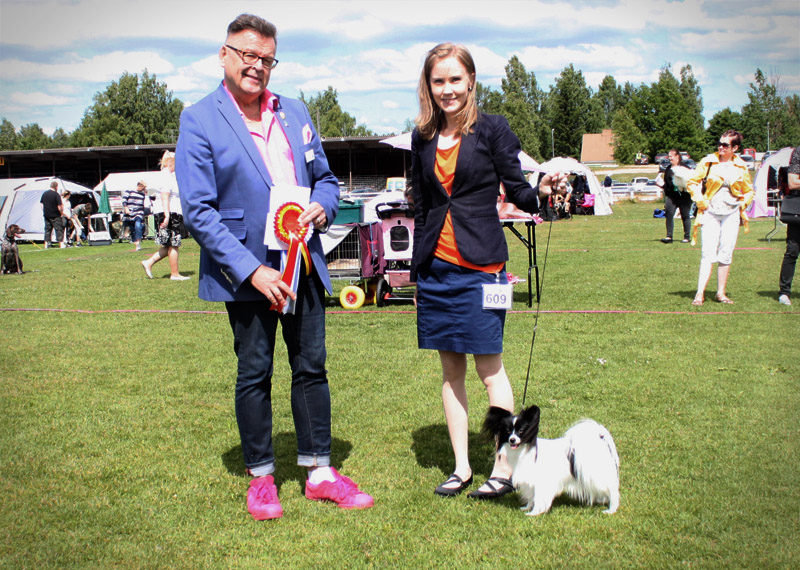 Our Kismet was chosen Best Of Breed in Riihimäki international dog show! Thanks to judge Johan Juslin.

Saturday Mocca participated in Finnish Agility team championships and did a great job! Allthough I slipped on the way so Mocca had to refuse one jump (or jump over me). Our mini team Päijät-Hämeen Agilityurheilijat didn't get a result due to other team members disqualifications. You can find video here.

Sunday individuals championships semifinal round I made a mistake and Mocca passed one jump. So our result wasn't good enough to the finals. Video is seen here. 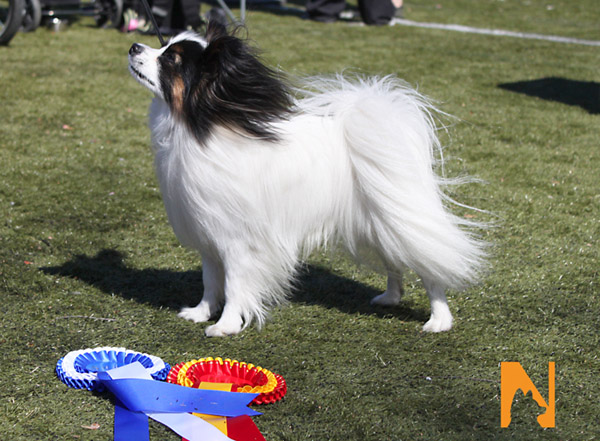 Neelis Imperial March "Macho" participate in Salo group show and was chosen Best Of Breed receiving his second certificate! Lisbeth Campbell from Norway was judging and Macho was the only papillon to get a CQ... Congratulations to the owner Evelina! What a beautiful male!

All our three bitches living in foster homes (Maiko, Helmi, Hilu) came to the show. Marja Kosonen had 10 papillons to judge all in all. Maiko was so close to win her class, maybe next time! 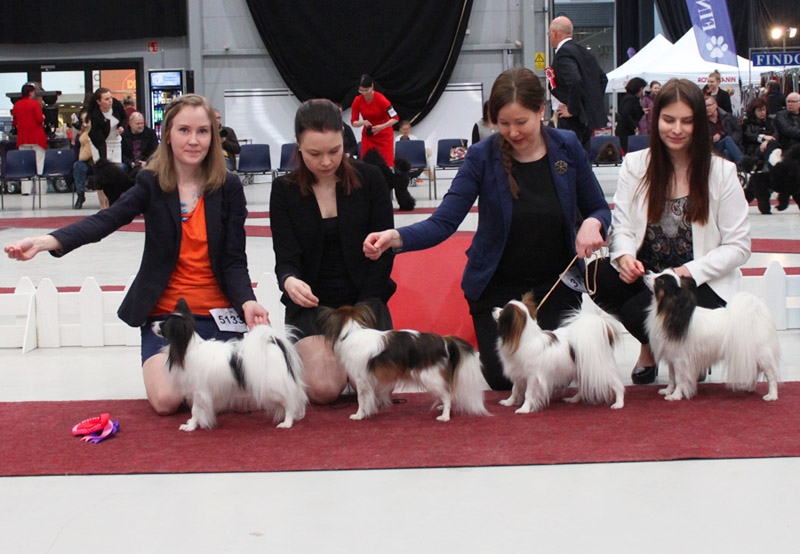 We had a fantastic day at Lahti int. dog show 26.3.! Our first-timer "Macho" Neelis Imperial March was best male 4th and got his first certificate! Judge Kari Järvinen liked all our paps and we were the best breeder out of three papillon kennels! 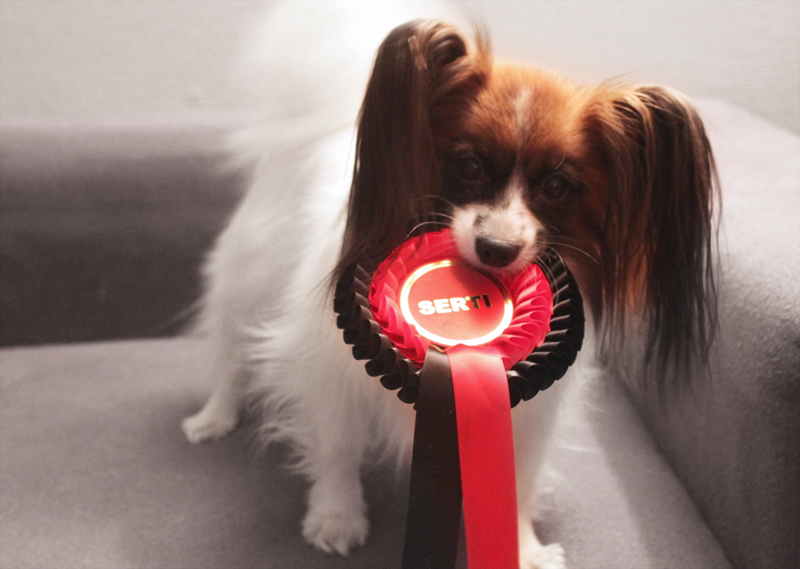 Agility competition in Hyvinkää 19.3.2017, judge Sami Topra. Mini3 Mocca won the course with super performance! She was fantastic and our placement was 1./21 and agi CAC! So proud of my little pocket rocket!

(For those who don't know, dog gets agility champion title with 3 agi CAC and the last one you can get no earlier than year from the first.)

We had a litter meeting to our "yearlings" and we also went to a group health checks (eye and patella) at the same time. Couple of our older offsrpings came along and all had great results. Thanks to the owners for coming to us and to the vet check! 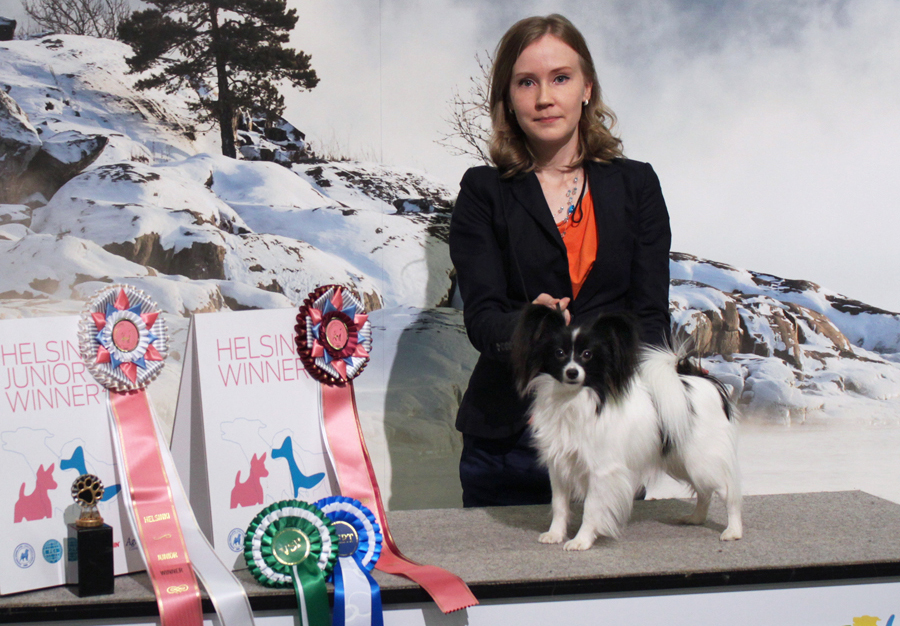 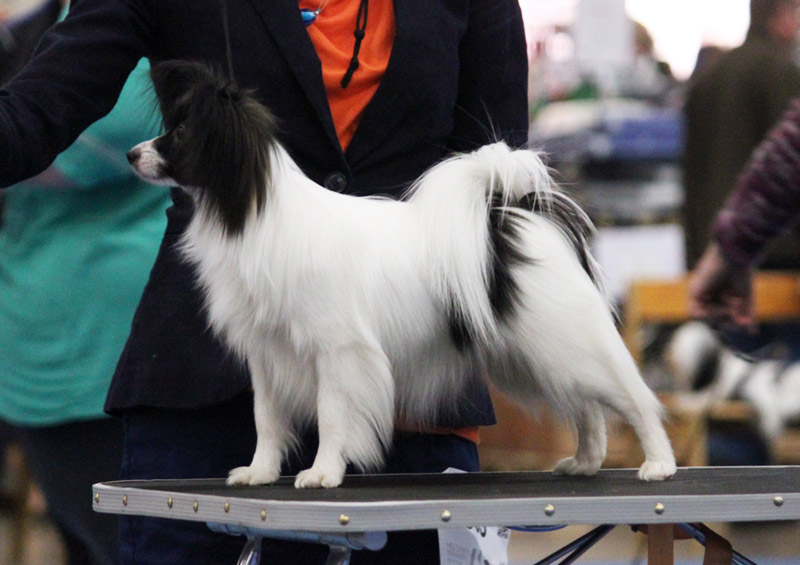 AGILITY BREED CHAMPION 2016 -competition was in Tampere. Judge in 2nd class was Henri Luomala and in 3rd class Jari Suomalainen.